Nawazuddin Siddiqui acted in this beautiful short film before he made it big in Bollywood. The movie is aptly titled ‘Salt N Pepper.’ (You will know why once you watch it.) He co-stars with the talented Tejaswini Kolhapure. Tejaswini is the sister of yesteryears talented actress Padmini Kolhapure and Shivangi Kolhapure (Shraddha Kapoor’s mom). The video ends with a … Read more You should see Nawazuddin Siddiqui in this short film called Salt ‘N’ Pepper 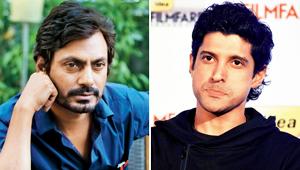 Ever since it was reported that Farhan Akhtar had opted out of Rahul Dholakia’s Raees, speculations have been rife about who would replace the actor. It will probably be Nawazuddin Siddiqui who is in advanced talks with the production company, Excel Entertainment. The film stars Shah Rukh Khan in the lead role as a local … Read more Nawaz replaces Farhan Akhtar