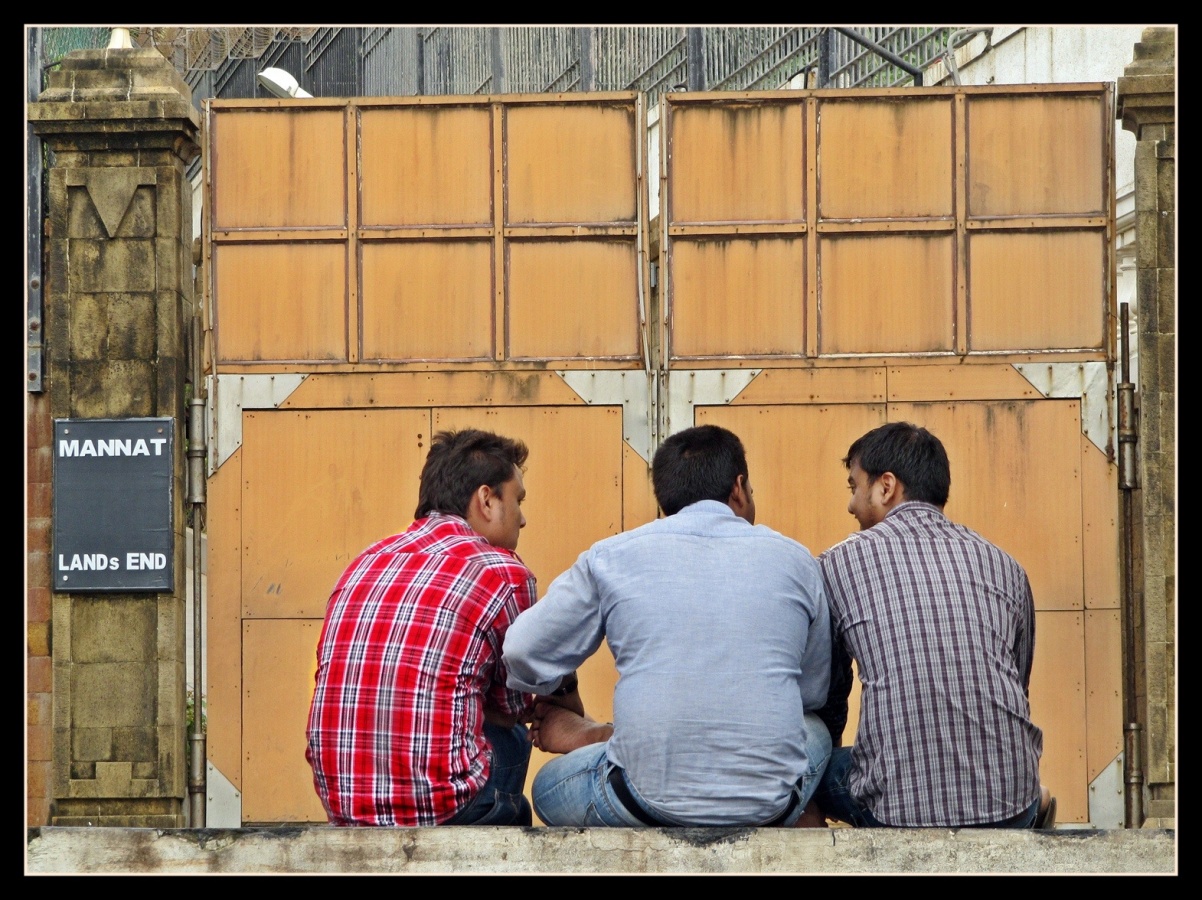 Bollywood actors whom we often address as stars and calling them that is no overstatement. The celebs live life king size. When we admire their lives oh-so-starry eyed ourselves, one thing that we can’t stop ogling at are their mansions. Mumbai, the city of dreams is an abode to many celebrities. Their palatial homes are a reflection of their rich lifestyles stylish mannerisms and classic preferences.

You would love to check out these enviable celebrity homes in Mumbai.

Name of the House: Mannat

Located at Bandstand, Mumbai, Mannat is undoubtedly the most talked about celeb home in Mumbai. It is none other than King Khan- Shah Rukh Khan’s lavish abode. Mannat boasts of exquisite exterior and luxurious interiors. SRK’s better half, Gauri has personally done the house and adorned it with some of the most expensive paintings and artifacts from across the world.

Shah Rukh Khan bought “Mannat” in the year 2001. Before being christened as ‘Mannat’ a heritage bungalow overlooking the Arabian Sea from Bai Khorshed Bhanu Sanjana Trust, which he revamped into a majestic, neoclassical columned bungalow Consequently, he also built a 6 storied building behind his bungalow, which house all his offices, gym, library, guest rooms etc.

The interiors of Shah Rukh Khan’s home are designed by wife, Gauri. Dark and earthly colors dominate the interiors.

Name of the House: Jalsa

Jalsa can be defined as a place that magnetizes visitors who almost assume a devotee-avatarand bow down to the glory of their Lord, waiting to get a glimpse of their mighty star. We are talking about one of the most swamped roads in Juhu, where Jalsa is located and where Big B and his family presently reside.Encompassing a living space of 10,125 sq. feet, this bungalow is nothing less than majestic. 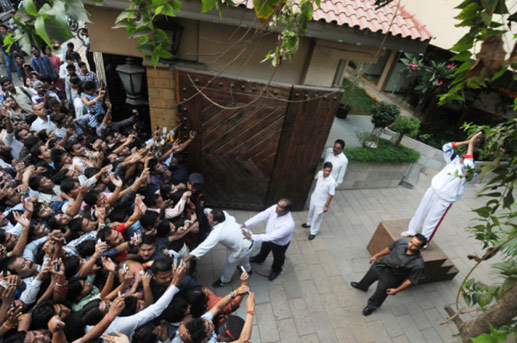 Besides boasting of a beautiful marble temple inside the compound, He has a beautiful temple inside his home too.The walls of Jalsa are home to some really beautiful and expensive paintings apart from gracing many iconic pictures of Amitabh and family.

Name of the house:Galaxy Apartments

Salman Khan, the Bhaijaan of the Indian film industry, is known to be a family man. He has spent more than 40 years in Galaxy Apartments. He has been living here with his family since childhood. Unlike other celebs, who look for personal abodes and privacy after achieving fame, Salman hasn’t moved out. It is a known fact that the KHAN-daan is very close knit and the family members dote on each other.

Salman Khan’s house has become a landmark in Bandra. Sallu Bhai has a mega fan following, Sallu lovers often gather in front of his apartment during his birthday or Eid festivities every year, just to watch the BHAI of Bollywood wave at them. The superstar himself comes out to the veranda to greet and wave to millions of admirers.

Name of the House: Freeda Apartments

Bollywood’s perfectionist and the face of Satyamev Jayate Aamir Khan his wife Kiran Rao and son Azad, live at “Freeda Apartments”, which is. Aamir Khan’s has a luxuries 5,000 sqft house. 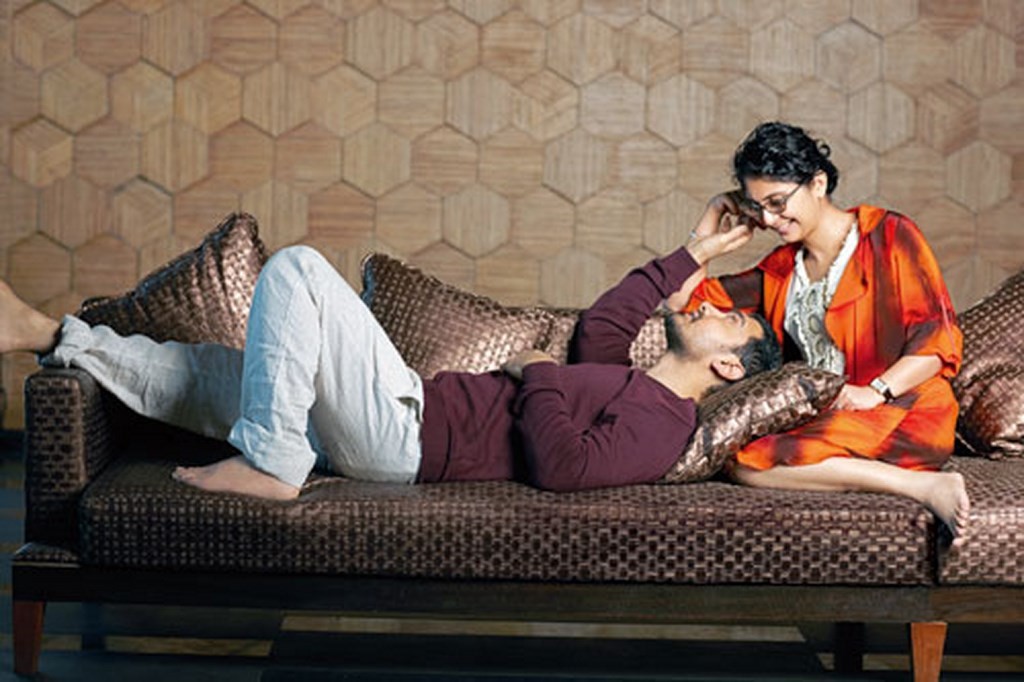 Name of the house: Krishna Raj

This charming Kapoor lad lives with his parents, actors Rishi Kapoor and Neetu Singh. The Kapoors lives in their huge and iconic bungalow named Krishna Raj, which is located in the Pali Hill area of Bandra. This iconic house was bought by the family and is christened after Ranbir Kapoor’s grandfather and grandmother, the renowned Showman producer-actor-director Raj Kapoor and his lovely wife Krishna Kapoor.

Name of the house: Prime Beach

The Khiladion ke Khiladi Akshay Kumar has struggled a lot before he made it big n Bollywood. It has been quite a winding road from being Rajeev Hari Om Bhatia (that’s his real name). He currently lives with his talented actress turned interior designer and columnist wife Twinkle Khanna, in a duplex house named ‘Prime Beach’.

There is quite an interesting story about Akshay Kumar’s home. Infact, it would not be an overstatement if one says life has taken a full circle for this actor. Almost twenty years ago, Akshay , a young and dreamy eyed boy who was looking to work in Bollywood, wanted to get his portfolio made. He approached top glamour photographer Jayesh Sheth. Unfortunately, Rajeev aka Akshay didn’t have enough funds to pay Jayesh, so he requested the photographer to allow him to work as his assistant in lieu of payment for the portfolio shoot. To his joy, Jayesh agreed readily. Akshay ended up working with Jayesh for almost a year and a half before the portfolio shoot materialized.

Coincidently, the very same Juhu bungalow which Akshay was destined to purchase years later was chosen as the outdoor location for the portfolio shoot. The bungalow back then was in a state of disrepair and had a disheveled and a deserted look. During one the shots, the watchman of the bungalow was so annoyed over the shooting happening inside the property that he shouted and abused Akshay and even threatened to call the cops. Akshay and his accomplice Jayesh were finally shooed off the property.

And all is well that ends well because today super star Akshay Kumar lives in the same place!

Love This ? Now Read This: