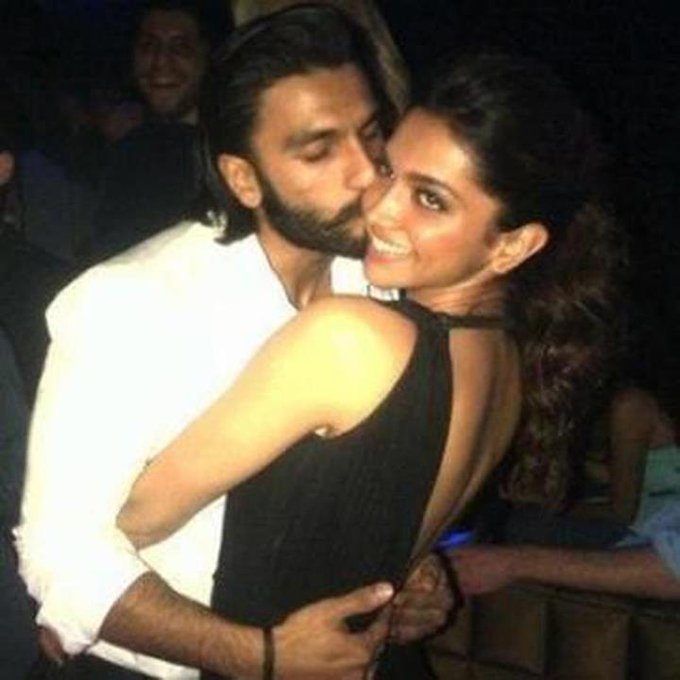 The Tinsel town is known for its celluloid love stories, stars that set the silver screen ablaze with their chemistry and not to forget songs that are oh-so-inseparable-part-of-our-movies. If on-screen romances makes us drop our jaws in wonder, witnessing celebrities who are real-life couples fondly expressing their love for each other will make your Dil go Hmmmm hmmmm hmmm. PDA’s (Public Displays of Affection) are the mantra Bollywood lives by.

These celebrities and their undying love for each other drew public eyeballs even raised a few eye brows. But cares who? For when two lovers are lost in each other’s embrace, the world ceases to exist. Some of them are still dating while others are not together. But that does not dazzle down the fire-works they created. Page3 Mumbai takes you down the memory lane and makes you revist  some celebs and their lovey-dovey gestures. “Awwwwws” and ‘Ooooohs’ are guaranteed.

Recently RCB captain and skipper and Indian Cricket heartthrob Virat Kohli invited the ire of BCCI in the recent IPL15 RCB against DD match. Kohli was pulled out for violation of rules and overstepping professional marks when he indulged in a chat with Anushka Sharma in the Chinnaswamy stadium stands. Sharma is a frequent visitor at Kohli’s matches and had even received a lot of brickbats when Kohli failed to perform during a crucial world cup match. Although Kohli managed to escape the fine for his act, all we can say is love is blind or at least it expects people to be blind.

Yet another story that unfolded on the stands. This PDA speaks a million emotions about how the two felt about each other. Deepika is currently dating Ranveer Singh whom she starred with in Sanjay Leela Bansali’s magnum opus ‘Goliyon ki Raas Leela… Ramleela’

It were IPL matches that gave us a glimpse of Preity and Ness’s love. Their PDA’s were caught on cameras numerous times.

Admit it, we loved this cute couple even when ‘Jab we met’ was not such a big hit. And how it broke our hearts when they separated from each other. While Kareena chose to be the begum of Saif Ali Khan, Shahid moved on with life and is soon to tie the knot with Mira Rajput.

The Nawab and his Begum are totally inseparable. Be the red carpet, a date or the airport, this couple displays some blazing hot chemistry.

Their sizzling chemistry has been a talk of the town ever since we saw them in the Bansali’s Indian adaption of Romeo and Juliet in ‘Goliyon ki Raas Leela… Ramleela’. Although they denied ‘anything more than friendship’ people could vouch for the fact that something was brewing between to two Bollywood hotties. The Ram-Leela jodi would be seen sharing screen space again in Sanjay Leela Bhansali’s film Bajirao Mastani starring Priyanka Chopra. We hope history repeats itself and we watch them set the screen on fire all over again.

The two ‘Student of the Year’ contenders were spotted celebrating Holi at Bandra. People at the party could not help but notice their PDA. The couple makes a totally cute pair and has been dating since last few months. Alia and Siddharth looked truly madly and deeply in love during a Holi party. The recent coke ad that they both have starred in has already won our hearts.

8.  Aamir Khan and Kiran Rao: The ‘thinking’ Khan surprised everyone in his first appearance on Karan Johar’s show Koffee with Karan Season 4. The actor indulged in some PDA with his wife Kiran Rao.

This one is a rather surprise entry as we have never seen Bib and Jayaji indulging in a PDA but this Star Screen Awards caught the couple kissing.