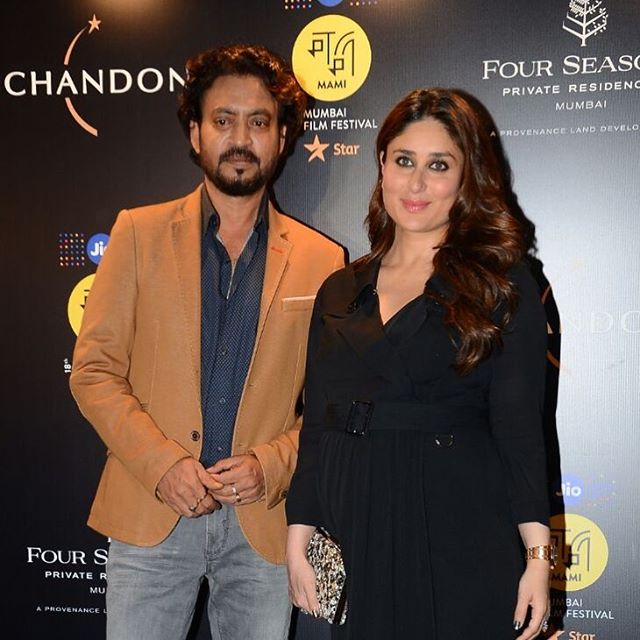 The most sizzling and hot begum of Bollywood Kareena Kapoor Khan enjoying her pregnancy period with full fun and entertainment. Recently, the successful daughter of Kapoor family spotted at 18th party MAMI film festival wearing black outfit which clearly showing her baby bump. The fashionable bebo completed her looks with pumps, curls and pink lips. She seems enjoying the festival with Kiran Rao, Irfan Khan, Karan Johar, Kabir Khan with wife Mini Mathur, Abhishek Kapoor with wife Pragya Yadav, Vikas Bahl, Madhu Mantena, Ayaan Mukherjee, Abhaydeol and many more. However Kareena was busy a little bit in talking with Kiranrao, the Chairperson of MAMI Film Festival. Both the beauty divas were gossiping, chatting and laughing with each other.

In the starting days of pregnancy, Kareena kapoor told that she hates to take the maternity rest. She opted to work during her pregnancy period also.  Kapoor family’s star doesn’t want any changes to come in her life because of her baby.  Earlier this future Yummy Mummy was celebrating her wedding anniversary in Kochi Kerala with loving husband Saif Ali Khan.  Unlike sister Karishma Kapoor, she is happy with her relation and presently she is far away from the Bollywood breakups and fights.

Kareena was in news in 2016 because of her movie ‘Ki &ka’with Arjun Kapoor in which Kareena was a self-dependent women whereas Arjun Kapoor was cleans and cooks and even beats up the goons to save his girl. The couple looked beautiful together in the movie. The lips locks of Arjun kapoor and Kareena Kapoor was in news. It was rumored before that Kareena has imposed a no-kiss clause, but later she told that, “There is no such clause in any contract of mine. If I want to kiss, I shall kiss. If I am told that a lovemaking scene is integral to the script, I will consider it.”

When the talks comes about her career then mush say that she is really a punctual star. Her pregnancy till now not coming in between her career. Mrs. Khan presently busy in her upcoming movie Aedil hai mushkil. She will be next seen in a project helmed by Rhea Kapoor, which also features Sonam Kapoor. She will begin shooting for the movie in March 2017 (post the birth of her first child).

Inspired by how busy Kareena is keeping herself during her pregnancy, a digital portal has approached the actor with an offer to document her nine-month journey. Apart from these, several magazine covers covers her ramp walking with a baby bump. This will be also a part of the documentary. Her baby proved lucky as she is being approached for a host of new endorsements since the news of her pregnancy was made public.

As per the reports, “She is one of the few B-town actresses who have not opted for maternity leave. She also maintains that motherhood will not stop her from taking on new professional assignments.” We tried reaching the actor, but she remained unavailable for a comment.