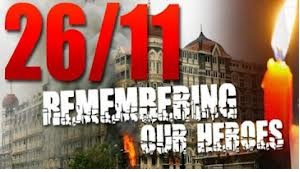 Blood, Bullets and Deaths… Brutal violence, Screams, Helplessness, Despair, Pain and Courage… Yes, these were all the realities of Mumbai attach on 2008 aka 26/11.

Today is the 6th Anniversary of the worst  massacre ever that shook Mumbai. The Mumbai attacks 2008 is still fresh in the minds of each and everyone in India. A nation of a billion aspiring to be on UN Security Council brought to its knees by just ten armed terrorists. Hundreds died, Thousands wept, Millions panicked, and a billions were terrorized.

The insensate killers didn’t distinguish between rich and poor, they did distinguish only between foreigners and Indians, Muslims and Jews. It was the worst ever massacre that had taken place after the 1993 bombing fiasco in Mumbai. What a horrifying marks it would have left in those victims who have witnessed it and struggle to get out of the disaster till date.

26 November should be declared a National Day of Remembrance. Not a holiday actually, but a day of debate or discussions on what had happened that day in Mumbai, what has been done to prevent a repeat and what needs to be done to create a strong response that is merged yet decentralized.

Abdul Kasab, who was one of the attackers, later confessed that he was psychically incepted to carry the act of violence, he was ill-used of his poor economic conditions and he was a mere killer robot for the operators. While this could be partly true, there is an irony in his statement. If the terrorists were very well incepted to kill, they could have been well inducted to hide the truth in order to disguise the secrets of the actual source. Well, the Mumbaikars really celebrated the day, when Kasab was hanged to death.

The martyrs who have lost their lives fighting this violence with great bravery need a special mention here.  Joint Commissioner Hemant Karkare, Additional Commissioner Ashok Kamte, Major Sandeep Unnikrishnan, Inspector Vijay Salaskar, Asst Sub Inspector Tukaram Omble and many others, the brave-heart police officials who sacrificed their own life to save plenty of innocent people from these terrorists and make them pay for their inhuman acts.

Well, hundred and sixty six people were killed when Kasab and nine of his assistants unleashed terror on the country’s financial capital four years ago.

After four years of the violence, we still cannot forget the mayhem. Perhaps it will lag around for many more years to come. May the soul of the victims those who had lost their lives rest in peace and may those victims who sustained injuries come out of the trauma very soon.

The B-town celebrities always stand behind every social cause. Today also they took to twitter to pay their tributes to the victims of the Mumbai attacks 2008.

Some of the B-Town Tweets:

Tara Sharma: ‘On this 4th Anniversary of Bombay’s devastating terror attacks, prayers 4 those who lost their lives & their loved ones. U r with us always’

Farhan Akhtar: ‘In remembrance of all those who lost their lives and all those who sacrificed theirs. 26/11. We shall never forget.’

Shankar Mahadevan: ‘Remembering those innocent people who lost their lives and their families whose lives changed forever!! Pray for PEACE.’

Our Honorable PM, Narendra Modi also tweeted: “Today is a day to reaffirm our commitment to work together to combat the menace of terror & uproot it from the face of humankind,”

Page3Mumbai salutes to all the Mumbaikars for their victory and hope and wish such tragedies never happen in future not just to our nation but to any other nation in the world. Let there be peace and harmony worldwide!!!