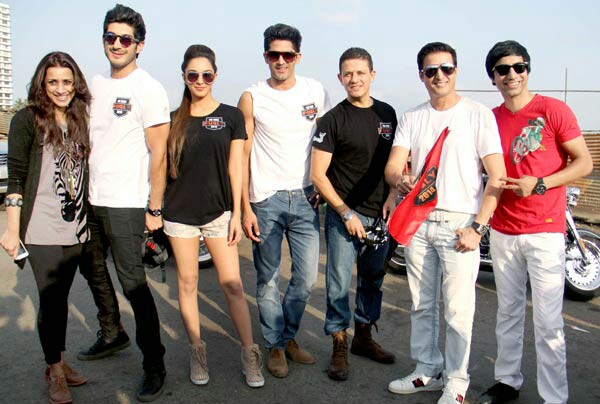 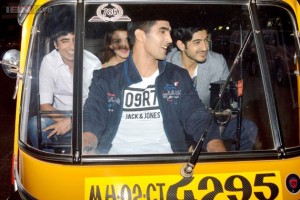 The star cast of upcoming comedy drama Fugly – Mohit Marwah, Olympic medalist Boxer Vijender Singh, Kiara Advani and Arfi Lamba was recently spotted promoting their film at Bollywood Choreographer Shiamak Davar `s summer funk show held in Mumbai. Fugly is coming on 13th June and it`s a story of four friends who are getting on to their lives and having a blast in their lives. Suddenly a big incident happens and then they fight against it and how did they come out stronger, that is what our film is all about. Directed by Kabir Sadanand, `Fugly` is a comedy thriller with a social message and also stars Salman Khan and Akshay Kumar in cameo roles.

A bike rally in Worli this weekend got a starry touch when the Fugly team stepped out in style. 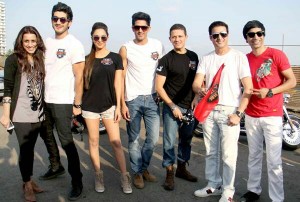 How we wish the Khiladi Kumar and Dabangg star had accompanied these newbies, but looks like this young beautiful team is ready for the cameras sans any star power. Debutant actor Vijender Singh was seen flexing his muscles, while Kiara Advani was happy posing for the shutterbugs. Model turned actor Mohit too didn’t leave an opportunity to get clicked. Besides the film’s star cast Daboo Ratlani too was present at the do showing his support for the film. We’re sure that the ace photographer helped the newcomers with the right poses.

But people’s eyes were glued on Mohit and Kiara, who allegedly are dating and even had an ugly spat at Karan Johar’s starry birthday bash. We hope that this hot looking couple’s woes are finally sorted; at least it seemed so as they posed for the media.