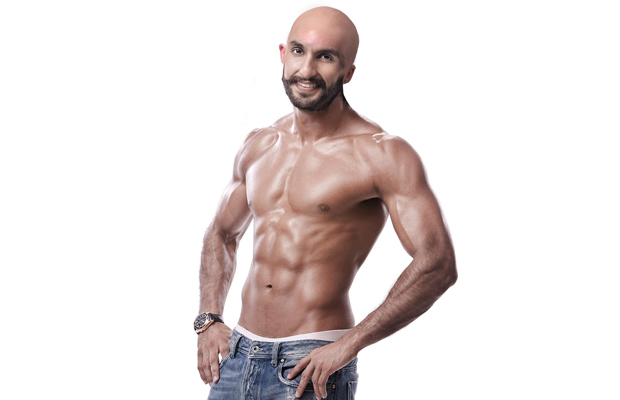 Ranveer Singh is just a few movies old but his work speaks out loud that this talented young actor is here to stay. Ranveer’s look, in his recent release Goliyon ki raas leela-Ram Leela was talked about a lot. In his next film too Ranveer Singh has gone ahead to experiment with this hair. Well, this time Ranveer has shaved off his hair for his next movie titled Bajirao Mastani, which is touted to be Sanjay Leela Bhansali’s ambitious venture. Don”t be surprised if Ranveer Singh’s new look for Bajirao Mastani becomes a popular hair-do soon.

Curently, Ranveer Singh is busy promoting his upcoming movie Kill Dill. Although the makers of Bajirao Mastani would want to keep Ranveer Singh’s new look for Bajirao Mastani under the wraps for obvious reasons, the actor is out in the open flaunting is cool look probably because he is involved with promotions of Kill Dill. This energetic actor was recently spotted at Yash Raj studios where he had come to promote the film on Amitabh Bachchan’s reality show Kaun Banega Crorepati.

His co-star Parineeti Chopra was to be talking about the bald look.“He is looking hot in his new look. There are very few men who look good when they are bald. I saw him after he shaved his head and he is looking awesome. I think ‘Bajirao…’ is going to be one of his best films,” said Parineeti.

Ranveer was concealing his bald look with a black hat and looked chic in a black suit with floral print. The actor who looked dapper in the whole look also clicked a selfie with Big B which Amitabh Bachchan later shared on his blog.

Ranveer Singh’s new look for Bajirao Mastani will definitely grab eyeballs and Page3 Mumbai wishes him good luck for both his ventures.