Bigg Boss  Season 7 ,  The most awaited reality television show ‘Bigg Boss’ is back with a bang. This is the 7th successful year of the dramatic series. Bigg Boss is a melange of a variety of emotions and is loved by the audiences. The show showcases a number of contestants known as ‘housemates’ who live under one roof for a prize money. Different tasks are allotted to the housemates each week.That celebrity who survives till the end wins the show.

One can not deny the fact that most of the viewers are delicately following the show for its host. Bollywood superstar Salman khan will for the 4th time in a row, host Season 7 of Bigg Boss. The popular actor shared the stage with co-host Sanjay Dutt in Season 5.

Every year a theme is followed in the show to attract the audiences. Bigg Boss season 7 recently shot a promotion campaign as it is supposedly to begin in the month of September instead of its usual month November. Sources reveal that this season is going to be smooth as heaven and at the same time hot as hell. 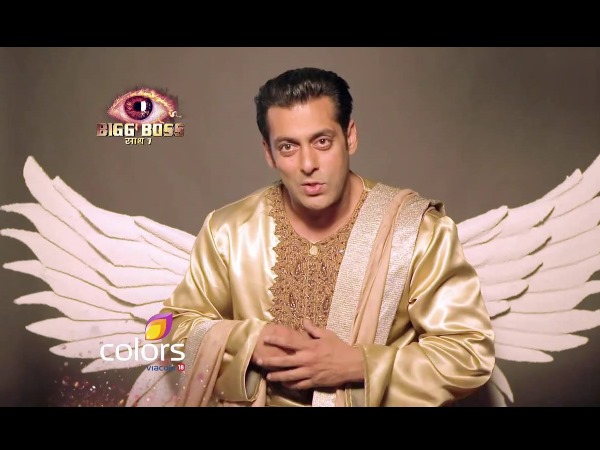 Salman Khan is seen playing a double role- An Angel and Devil. Dressed in long white robe like an angel from heaven, the actor wears the character to depict his kind side. On the other hand, his doppelganger has a wicked and a nasty character to play. The attire carried by the actor is a black hooded jacket, black vest and matching black pants. His naughty smile and twinkling eyes highlights the charm of this adorable personality. He quickly gives 5 long shots one after the another withing a span of 20 minutes.

Salman Khan plays the gatekeeper of both heaven and hell. The interesting part is that the audiences will embrace both the characters ‘saath saath‘ as its the Bigg Boss Season saath.

With every approaching year Bigg Boss gets twists and turns and makes sure to deliver exactly what the Indian audiences are looking for. Humor, anger, celebration, anxiety, drama and many more like emotions give flavor to this reality television.

The names of the housemates are yet to be disclosed. We hope that we get to see only entertainment. Bigg Boss Season 7 is hot as hell and harmless as heaven!! Buckle up your seats for the roller coaster ride.