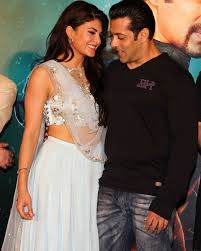 Salman Khan and Jacqueline Fernandez were invited to participate in the election campaign by Mahinda Rajapaksa’s son Namal and this interestingly makes Sallu Miyaan the first Indian actor who roped in for the poll campaign in another country. Both the actors will be seen supporting Rajapaksa.

The Lankan’s joy knew no bunds when they spotted the Bollywood stars. Looks like Bollywood casts its spell wherever it goes.

Salman Khan and the ‘Kick’ lady luck make a cute pair and their chemistry made gossip mongers go all hush-hush. The news doing rounds is that the on-screen couple also share a very close relationship and are said to be more than friends. Salman Khan also grabbed eyeballs when he revealed that Jacqueline was the first actress he would like to kiss on screen. The actress in fact was also pictured giving kiss during the promotion of ‘Kick’.

For those who remember the launch of Kick’s trailer, the duo’s comfort level with each other was very evident. All through the event the two of them were seen whispering something into each other’s ears as shutter bugs captured their moments of bliss.