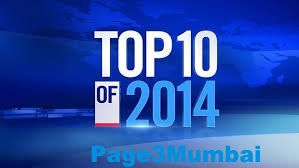 We are on the edge of giving a colossal bid adieu to the year 2014 and welcoming the new calendar year 2015. The coming year would be chock-full of new experiences, new stories and a new level of fun.  The year 2014 was interesting in itself. It has been a year filled with big stories that shaped the conversation on race, politics, Bollywood and much more. Before welcoming the New Year, let’s have a quick overview of the top 10 news that are covered by Page3Mumbai exclusively for our candid readers.

Lesbian marriages are not allowed in India and U.S., but they both are destined to be together. It is the story of Seema and Shannon, they first met each other in a boot camp and it was the love at first sight in just a blink of an eye. The two women were from two dissimilar cultures, faith and religion. But, as they say, Love is blind! Love does not see a cast, religion or nationality. Yes, Seema is an Indian girl whereas Shannon is American. Both decided to live together and they got married June 2013 in Los Angeles, California. Page3 Exclusively captured this news as their story was unbelievable for some and highly imaginative for some. Read the full story of Seema and Shannon here: Love conquers all!

The Modi fever is still roaring in the air with a great zest and zeal. Ever since, Narendra Modi has become the Prime Minister of India, the charismatic leadership of our PM has been in the limelight. Our dear PM, Modi launched the Swachh Bharat Abhiyaan on 2 October. From top Bollywood celebrities to the sports personnel’s, everyone joined hands with PM Narendra Modi and second his idea of Swachh Bharat Abhiyaan. The Celebrities include Amir Khan, Priyanka Chopra, Salman Khan, Hrithik Roshan, Sania Mirza, Sachin Tendulkar and Amitabh Bachchan have picked up Jhaadu (Broom) to clean a part of the respective area of their city’s nominating other celebrities to lead by example. Swachh Bharat Abhiyaan being a great initiative thus has made a mark in top 10 news series.

The year 2014 has been a head high year for Indians as a dedicated child activist Kailash Satyarthi got a Nobel Prize 2014 in Peace. Kailash Satyarthi, at 60, man of substance has carried forward the tradition of Mahatma Gandhi and led various peaceful protests against the child exploitation. He is the founder of Bachpan Bachao Andolan (BBA) and has single-handedly brought to centre-stage the debate on child rights in India. The man certainly deserves a place in top 10 news series of the year.

It was a pride for the Mumbaikars when the grand, swanky T2 Terminal was open publicly. The new iconic Terminal T2 is India’s first and most advanced vertical passenger terminal that integrates world class design, architecture, infrastructure and operational efficiency. It also has a rich infusion of Indian heritage and cultural character. The airport also offers the best class comfort and convenience for its guests worldwide. Travelers who pass through the new T2 terminal building at Mumbai Airport can pass the time waiting for their flight by viewing an art exhibition. T2 Terminal elegance and comfort bagged the place in top 10 news series of Page3Mumbai.

Monorail was another great achievement for Mumbaikars after the big bash of T2 Terminal. Maharashtra Chief Minister Prithviraj Chavan inaugurated India’s first monorail in Mumbai, another feather in the Mumbai’s cap. Monorail is considered as a major new addition to the city’s public transport and is successfully running throughout. Monorail in a very short span of time has earned a tag of “joyride” because of its spacious stations, concourses, and ATM’s and refreshment facilities.

Mumbai Metro, a joy of pride has officially announced 92.7 BIG FM as its official partner exclusively for its travelers through its tagline “Suno Sunao, Life Banao”. The station has geared up for a number of on-ground as well as on air activities to give the listeners all the up-to-date news of much-anticipated beginning at the Metro. Metro is most definitely an ideal combination of entertainment and information about the Metro that Mumbaikars have so eagerly waited for. So, let’s stay tuned for the latest on Mumbai Metro only on 92.7 BIG FM!

Aamir Khan aka Bollywood’s Mr. Perfectionist is one of the most successful actors in Bollywood. He is back with a bang through his famous show Satyamev Jayate and has successfully highlighted different social issues, women’s issues with his most coveted TV Show Satyamev Jayate. The show successfully reveals the most sensitive issues of nations. Due to its popularity, the show surely shares a space in top 10 news series on Page3Mumbai.

Mumbai, the financial capital of India, has another feather added in its cap; India’s first floating hotel was inaugurated in Mumbai. The Maharashtra Tourism Development Corporation (MTDC) has launched India’s first floating hotel “The Floatel”  at the Maharashtra Maritime Board’s jetty at Bandra under the Bandra-Worli sea link. The three-star hotel, constructed in the US, will have two restaurants in luxury dining, besides a coffee shop.

Women’s safety is a rapidly growing issue in the current scenario. Mumbai, where every 2 out of 4 women are working, the safety of such women’s is at high risk. Women, who take public transport and feel unsafe while traveling during odd hours, can get in touch with the police by sending an SMS about their location, destination and the registration number of the vehicle to toll-free number. With the catch line, “Travel safe when alone”, Mumbai Police launched an SMS campaign for women’s safety on International Women’s Day. The news is worthful and valuable to share space in top 10 news series covered on Page3Mumbai.

The first Double Decker flyover is constructed and opened for public in Mumbai. The flyover joins Santacruz Chembur Link Road (SCLR). They would have to crawl through certain sections as the traffic police have imposed a speed limit of 30kmph on the bridges, along with some other restrictions to ensure a smooth flow of traffic.

Mumbai, the city of dreams is springing up with modern techniques and lifestyle. The year 2014 gave birth to amazing lifestyle needs and requirements that are necessary for a common man to survive in Mumbai. Page3Mumbai tried hard to cover the top 10 news stories related to the growth and development in Mumbai. Comment below in the comment box, for any news that has left by chance through our team.

A very Happy and Prosperous New year 2015 from Page3 Team!