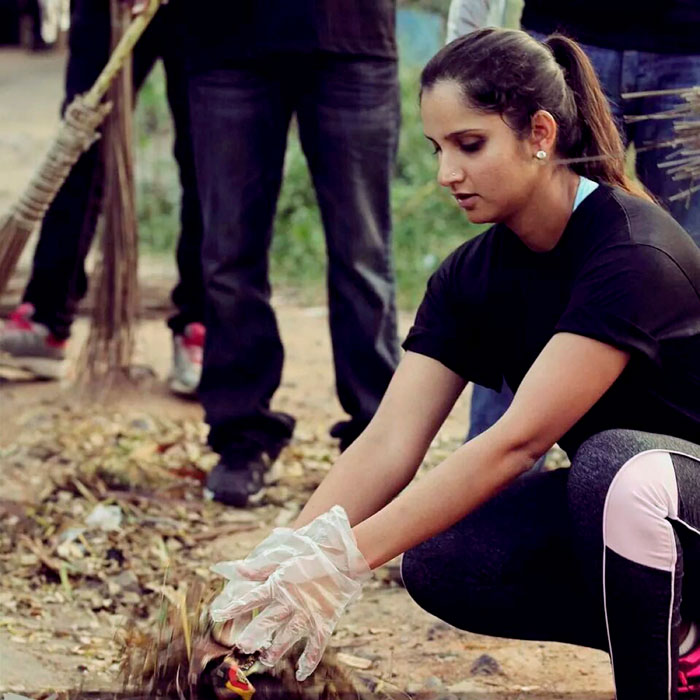 The charismatic leadership of our dear Prime Minister Narendra Modi has been in the limelight ever since he has graced his miniserial post. Known to walk his talk, he launched the Swachh Bharat Abhiyaan on October 2. What followed was a host of celebrities from Bollywood, businessman and Sports-persons nominated themselves and their friends from their respective industries to be part of the bandwagon.

Recently Sania Mirza too took the streets and became a part of the initiative to make India a clean country. Apart from Sania Mirza, the likes of Hrithik Roshan, Priyanka Chopra, Aamir Khan and Sachin Tendulkar have joined hands with PM Narendra Modi and picked up the jhaadu to clean a part of their respective cities. And they kept the good cause going and in turn nominated other celebs to lead by example. Anil Ambani after being nominated by Sania Mirza cleaned a part of the street outside Church Gate station in Mumbai, and nominated Amitabh Bachchan, Mary Kom and Akkineni Nagarjuna, among others, to take up the challenge. Sania Mirza is the latest celebrity to join Swachh Bharat Abhiyaan along with Bhojpuri superstar Ravi Kishan.