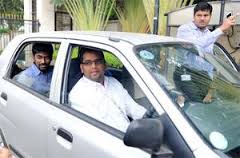 Many of us travel to our office in our own vehicles, and sometimes we see many people travelling on same route and often to same destination at around the same time. Often we think what if we had a group of people who could join us on this daily commute? Well, Malad resident Rajeev Lamba was hit by same thoughts which gave him the idea to start a car pooling group through Facebook.

What is a Car-pool?

In a car-pool, usually, the car owner who commutes to work alone in his private vehicle, offers rides to people who ply on same route for work in their private vehicles or public transport. It is an eco-friendly commute as it helps reduce vehicular congestion and carbon emission too. It is also a safe way of commuting and also economical.

Rajeev Lamba, 40, used to travel daily from his Malad residence to his office in Sakinaka all alone braving his way through heavy traffic. One fine day it struck to him, that car-pooling will not only help de congest Mumbai roads, but also reduce air-pollution and petrol usage too not to mention some good company, to kill the otherwise boring commute.

So Car Pool Mumbai, a Facebook page came into existence nearly a year ago. A social media platform, which helps Mumbaikars find members for car-pool and also promote ecofriendly and stress free daily commute. Presently, with 638 members, the numbers are swelling with each passing day.

Rajeev Lamba, who travels from his Malad Residence to his office in Sakinaka, has different set of car pool members for his to and fro commute. With each passing day, the idea of car-pooling is fast catching up not only in Mumbai but also in other cities like Pune, Bangalore, Delhi etc.

Though it is a convenient way of travel sometimes the schedule can hit roadblocks, especially on homeward journey, as sometimes people get struck in their work and leave office late. But otherwise, transport experts consider it as a very good medium of transport and a good way on de congesting otherwise famous Mumbai traffic and also easy some burden on public transport.

Members of carpool also have their own way of contributing and sharing the transport cost. Some share fuel on rotation basis, some pay for parking fee, some pay for monthly toll pass or some just offer a free ride.

Mumbaikars who want to save some time and money and want to enjoy stress free and safe mode of transport can join on to this Facebook page “Carpool Mumbai” can do a bit by contributing to make Mumbai roads pollution free and congestion-free. Car-Pool to work with Rajeev Lamba and be a good Samaritan in the journey of life.