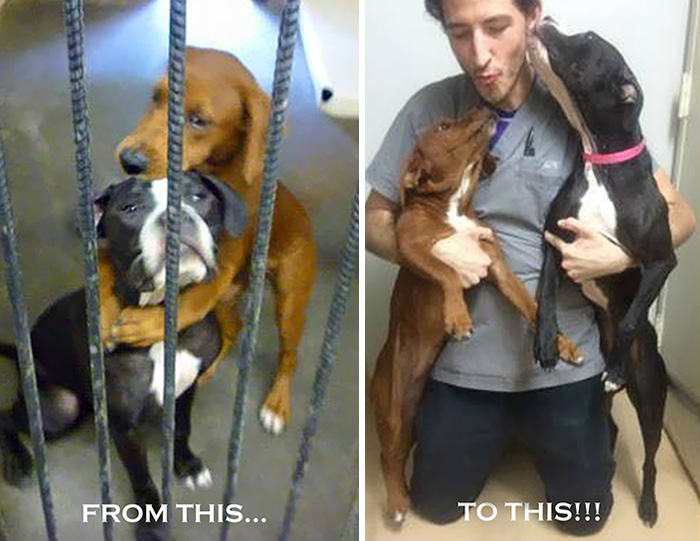 A dog will teach you unconditional love. If you can have that in your life, things won’t be too bad… Robert Wagner

Those who are proud owners of dog or have a soft corner for these cannines, will never challenge the statement. And those who are not self proclaimed animal lovers too will feel the strings of their heart tugging after reading this beautiful tale of unconditional love and friendship.

The dogs Kala and Keira were captured in what could be called as an epic photographic moment while hugging each other in a cage at an unnamed shelter. If you look at the photo closely, you will see that Kala’s brown front legs and paws are in a tight embrace around Keira’s neck. Also you cannot miss out on those eyes that speak volumes about the emotional turmoil the little puppies are going through or is it that they already know what awaits them.

Angels Among Us, a nonprofit Pet Rescue centre based in Atlanta that works to save dogs and cats from being euthanized in shelters shared this picture on its Facebook page and the flight of the tugs touched millions of netizens. Shelter employees shared that Kala and Keira would be put down that day unless someone adopted them or offered to foster them. Angels Among Us urged readers to re-post the picture and help.

“If you’ve ever wanted to foster but just couldn’t quite decide, now is the time to say YES!!” Angels Among Us wrote in its post.

The photo, as expected set the internet on fire and what followed was thousands of likes and shares that spread quicker than forest fire. Within two hours after the photo was posted to Facebook, Angels Among Us shared in another post that the dogs had been rescued and would not undergo Euthanasia. Infact the adorable ones were already on their way to see a vet and then on to a foster home.

A second, happier photo of Kala and Keira is now making its rounds on social media. And this lovely pups have the power to make you fall in love with them.