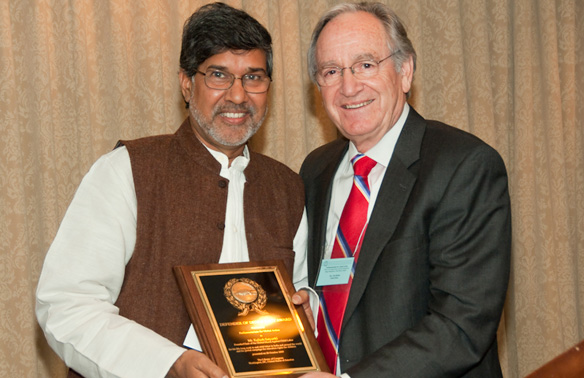 It has been a Chak De India Week for our country. First we went to Mars, we brought home gold medals and now we win a Nobel for Peace.Such a moment of pride for our Bharat Desh yet very ironical as like my friend on Social Media describes “Midst of guns and bomb shelling across the border- The Nobel Prize 2014 in Peace is awarded to Indian Kailash Satyarthi and Pakistani Malala Yousafzay. Irony. We win the Nobel. They win the Nobel for Peace. And between the lines we kill.”

Indian child rights activist Kailash Satyarthi shared the Nobel Peace Prize with Pakistani teenager Malala Yousufzai who stood up to the Taliban and survived a gun in her head. But the entire paradox appears just like a fly on the wall in terms of what we have achieved. Our heads held high because one man called Kailash Satyarthi, a dedicated activist decided to ‘be the change you want to see in the rest of the world’. Here are 10 things about this man of substance you would want to know:

1. Satyarthi, at 60 has rightfully carried forward the tradition of Mahatma Gandhi and lead various peaceful protests, the                             exploitation of children for financial gain being his primary focus.

2. The Nobel Laureate is a member of a high level group formed by UNESCO on Education for all comprising of select Presidents, Prime Ministers and UN Agency Heads.

3. He and his organisation, Bachpan Bachao Andolan (BBA), the Save Childhood Movement, have single-handedly brought to  centre-stage the debate on child rights in India. He has been at the forefront to put an end to child slavery and exploitative child  labour ever since 1980.

4. Satyarthi has helped liberate children from slavery like labour conditions and advocated for various reforms, as director of  the South Asia Coalition on Child Servitude and leader of Bachpan Bachao Andolan.

5. In 1980, Satyarthi gave up his job as an electrical engineer to follow the voice in his head and the passion in his heart. E then began the crusade to end exploitation of children in India. He rescued of over 78,500 children who were employed as child      labours and developed a successful model for their education and rehabilitation when he was working at the grass-root level.

6. In 1994, he founded a group now known as Goodweave, which certifies child-labor-free rugs and provides assistance to  rescued and at-risk children.

7. Satyarthi was instrumental in linking the fight against child labour with the efforts for achieving his dream of ‘Education for All’.

8. It has been an uphill climb for this Nobel Laureate Kailash Satyarthi. He has survived numerous attacks on his life by local mafias during his crusade to end te drudgery child labour. He and his colleagues were while they were rescuing child slaves from garment sweatshops in Delhi on 17 March 2011. His office too was ransacked a number of times but this man never wavered or bent.

9.  Satyarthi has been honoured by the Former US President Bill Clinton in Washington for featuring in Kerry Kennedy’s Book ‘Speak Truth to Power’. This book had featured Satyarthi’s life and work among the top 50 human rights defenders in the world.

10. Satyarthi has been the subject of a number of documentaries, television series, talk shows, advocacy and awareness films and has won a number of international awards.