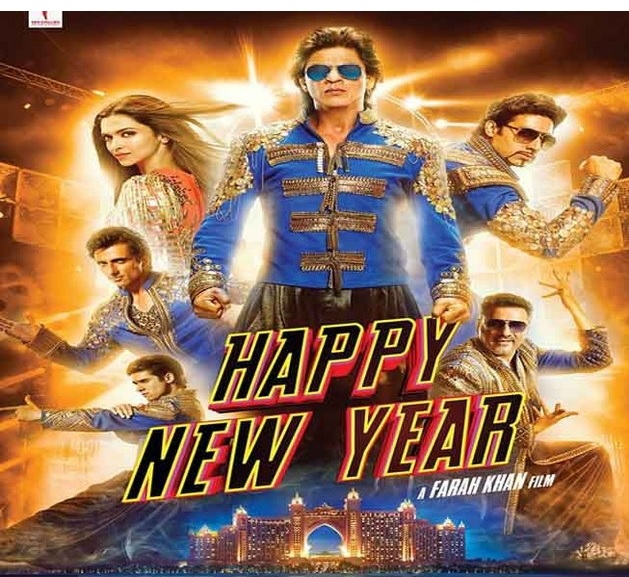 The much awaited extravaganza cinema “Happy New Year” aka Farah Khan’s masala flick has everything going well business wise, no matter how much collection it has done on box office for its visual opulence, sad to say, it has nothing new to offer nor it is a particularly happy narrative mixture. It has ‘stale’ written all over it.

Despite of being an illogical film, being an SRK brand movie, Happy New Year has won the hearts of millions of people. Call me biased, but when it comes to Shah Rukh Khan, there is nothing that I don’t Love! Needless to say, I completely enjoyed watching his latest release, HNY. It’s grand, beautiful, shot in exotic locations across Dubai, has all the SRK moves which fans love, a hit Jodi (Shah Rukh Khan- Deepika Padukone), action, drama, romance, naach-gaana and loads of fun moments that flick me with an ear-to-ear smile plastered on my face.

Considering the multi star studded film has garnered a collection of more than 44 crores on the opening day, it’s quite apparent that it had a similar hit on thousands of others too! Thus I decided to pick top 5 positive things about HNY (Happy New Year) that made me (and may be you too) smile.

SRK scintillates as Charlie with well-defined body, rock-solid abs, some extremely powerful action sequences and not allowing his starlit aura overshadow the other star casts. SRK does it in a way, different from all his coevals. In this film industry where ensemble films are generally blue-penciled to benefit a certain superstar in the film, SRK keeps his ground and makes sure HNY come across as a team effort and not just other SRK-Deepika film. His kick ass dialogue delivery is yet another extra added effort by him.

Deepika Padukone has given an awful accent inspired no doubt by her Chennai Express act, is the eye-candy who has been roped in to provide the feminine equilibrium to the generous male skin show on the screen. Also her comic vocabulary made people more laughed from top to bottom. If ‘Eajy lagta hai Mohini ka dance’ was something to go by, be sure to be amazed by this multi-talented actress’s sincere performances throughout the film. Yes, in this film, she doesn’t know how to speak ENGLIS ( yeah that’s how she pronounces it) but lose your heart to Mohini who only desires to achieve one thing in life-ijjat from everyone. From her Maharashtrian twang to her English dialogues, from her emotional scenes to her sensational dance numbers, Deepika Padukone has hit the right chord.

Happy New Year being a Farah Khan film produced under Red Chilies Entertainment is a filled with a lot of high-flaunting and magnificent shots. A huge canvas set for a film of such a stature. The opening shot it-self confirms the extravaganza and lavishness to be expected from the film. The entire heist is well managed and the supporting star casts contribute equally to the film. Boman Irani marvels with his single 50 year old Parsi behavior, Vivaan Shah comes across as a treasure found to the industry, Sonu Sood flaunts his extremely pleasing body and last but not the least, its Abhishek Bachchan who steals the entire show with his comic, naughty role as Nandu, his nagoba (Snake) dance and all joyful enthusiasm.

With the satisfaction with comic and action scenes, the film celebrates the spirit of India like no other. There are many instances in the film where you feel pride and wide smile on your face. Though being a dance-heist film, Farah has effectively let the heart rule out the technique. Someone might not like the way the Indiawaale team dances because they cannot dance but it is the heart, soul and morale that lifts the fun quotient of the film. Farah Khan uses the platform of her film to bring out a jubilant story of the ‘Dil-se wala dance’ to the ‘technique wala dance’ and certainly every Indiawaale today must be proud for the same.

It was indeed a great treat to see a special appearance of SRK’s new born son AbRam Khan on screen for the first time that too with his father. The credit rolls at the end of the movie features the superstar sharing some candid moments with his chubby son. Aww!!

There is no doubt that Farah Khan knows the craft well but she is yet to give an entertainer like OM SHANTI OM.

Being a die-hard fan of SRK, I totally enjoyed the movie. If you go and watch Happy New Year, you will definitely sit through it, but will you walk out smiling, I don’t take guarantee 🙂