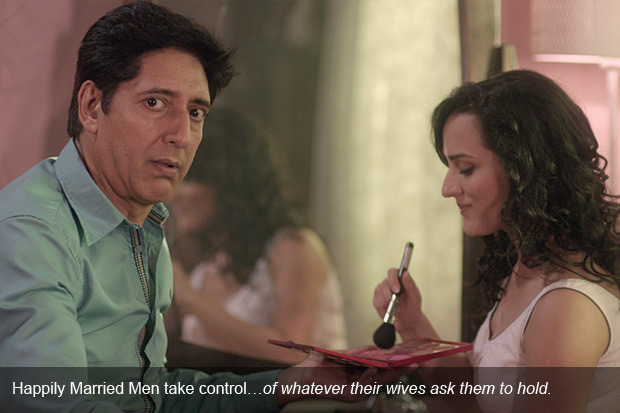 Happily married’ sounds almost like an Oxymoron, Doesn’t it? Do the species called happily married men even exist? “Happily Married Men”, a concept that comes across as a funny take on wives, has been the Butt of jokes in many comedy shows. But, it needs to be done with tact or else it looks sexist. So when a brand Of Repute Like TBZ( Tribhovandas Bhimji Zaveri Ltd) attempts to employ the ‘Happily Married Men’ concept to its commercial, it has to be a very measured one.

The 2.34 minute long music video has three husbands rapping away their secret to being happily married. There are two kinds of happily married men. The ones who sing and dance about it, like the ones in this music video. And then, there’s the second kind – you’ll know about them towards the end of this video. According to this video he can be Happy Married Man, by always saying or doing what his wife expects him to say or do. Like watching a Rom-Com on every Friday with her, or praising her makeup, cooking food for her and her mom, even though she looks fat in the new dress, and you want to say yes, you end up saying no, by taking her to shopping every Sunday, not spending time with friends or going fishing with them or playing video games, makes the wife happy and in turn you end up being a Happy Married Man.The wives are depicted stereo typically as control freaks who are mean, materialistic, heartless, conditional women who are only happy with their husbands after being taken shopping, shown movies, and getting most of their work done.

The ad then suggests an easier way to ‘keep her happy’ by buying her gifts from the TBZ Solitaire Collection. TBZ  wedding collection provides an eternal Range of Solitaire. Their solitaire collection consists of intricate & mesmerizing diamond necklaces, diamond studded fingerings, delicate earrings and ear studs and bangles. By gifting your wife one of these pieces of art, you’ll be no doubt be a very Happy married man.

Uploaded on the 25th of July, it has garnered close to 421,842 views with 228 likes and 39 dislikes while I write this. #KeepHerHappy on Twitter ,The TBZ Twitter handle has been busy propagating the educational commercial using the hashtag. The TBZ FB and Twitter pages have been extensively sharing the jewellery from the said Collection, while sharing the music video and valuable tips to #KeepherHappy.

Our Take no matter what, “Behind every happily married man, is a happier married wife ”so the Ad though may appears as sexist to some but it definitely deliver whats intended, sell diamonds;-)

If you’re in a conundrum, here are some ways to #KeepHerHappy: