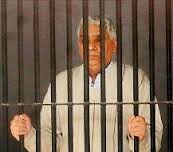 4 things you did not know about Rampal Baba

We know now that these babas are frauds of the first order who exploit the poor’s need for spiritual guidance and extort money from followers to build their empires, called deras. We know they promote superstitions and falsehoods and project themselves as

“Godmen”, if not God. All of them are conmen to begin with. Rampal been in news for all the wrong reasons. The man who claimed to possess supernatural powers and self-declared Godliness is exposed and turned out to be wolf in a sheep’s clothing. Here are 4 things you did not know about Rampal Baba:

1. Rampal was born on September 8, 1951 in Dhanana village under Gohana tehsil of Sonepat district. His father’s name was Nandram and mother’s name was Indradevi. He got his diploma in engineering and worked as a junior engineer in the irrigation department but supposedly resigned or was allegedly kicked from service which he accepted five years later on May 21, 1995. Since childhood, he had a fascination for taking part in kirtans, satsangs and bhajans. He was guided by 107-year-old Kabirpanthi Sant Swami Ramdevanand Maharaj.

2. On his website his supporters claims that he was of a religious nature when he was young and worshipped Lord Hanuman. He met his guru Swami Ramdevanand  and then became a disciple of the saint Kabir. He established his first Ashram in in a village called Karnotha in Rohtak district. After that he built many ashram including his current head quarter in Barwala village near Hisar. In the book published by his supporters, claims that he is an Avatar and some foreigner Astrologer had predicted about this avatar.

3. In 2000, Rampal Dass, a junior engineer in the Haryana irrigation department who was sacked now heads a dera or cult worth Rs. 100 crores and goes by the name of Sarguru Rampal Ji Maharaj. The 63-year-old owns a fleet of luxury cars, including BMWs and Mercedes and lives in an ashram in Barwala, Haryana, spread over a sprawling 12 acres. The ashram complex had a 20-feet wall all around for fortification. It was this wall that the security forces found hard to penetrate when they tried to enter the complex on Tuesday.

4. Rampal is said to have over 25 lakh followers in Haryana, Uttar Pradesh, Rajasthan, Madhya Pradesh, Punjab and Delhi. The Facebook page has recorded over 2,000 new likes in the last one day. In the last four years, he has skipped court 43 times. 315 bore rifles, five .12 bore guns and some cartridges. Bullet-proof vehicles were also found.